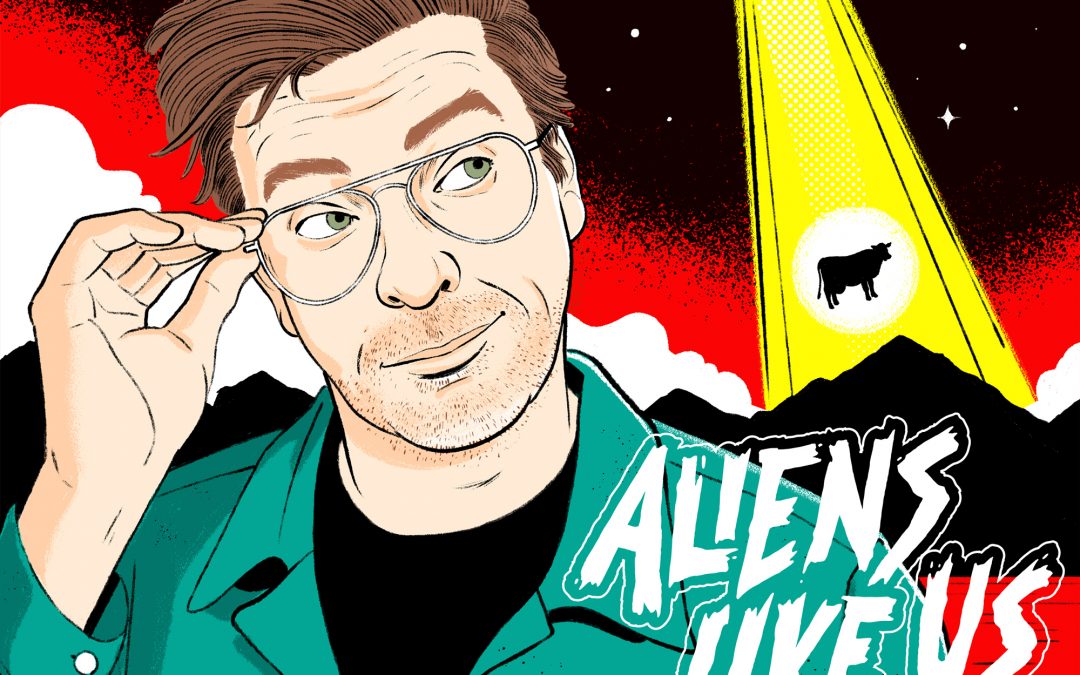 Rhys Darby (Band Manager Murray Hewitt, Flight of the Conchords, The X Files, Jumanji) is joined by friends Buttons and Ethan to rally all alien nerds, pop culture pundits, and space experts for a hilariously investigative new podcast series, Aliens Like Us – available exclusively on Spotify.

Highly acclaimed actor, comedian and host sits down with friends and special guests to unearth the truth behind outer space’s biggest mysteries. The first series is out exclusively on Spotify, and Rhys, Buttons and Ethan will be doing a special live podcast record at Contact in the Desert!

Rhys Darby is an actor, writer, podcaster and stand-up comedian from New Zealand.

Best known as Murray from HBO’s Flight of the Conchords and Nigel in the Jumanji reboots,  Darby has gone on to star in a plethora of television and films, from The X Files, to Voltron: Legendary Defender, to TBS’ Wrecked and most recently the Jumanji films.

Rhys’ love of the weird is seen in his stand up and writing, and for ten years he has had first a radio show, then a podcast on cryptozoology, The Cryptid Factor. Darby was thrilled when approached by Spotify to do a podcast about aliens, Aliens like Us. A regular attendee of alien conferences and star gazer, it is a dream come true.

An ex-soldier in the New Zealand Army and a veteran of twenty years as a stand-up comedian, Darby made his feature film debut in Yes Man. He went on to star in films like The Boat that Rocked (Pirate Radio).  In recent years he was seen in the Taika Waititi’s What we do in the Shadows as alpha male werewolf, Anton and Hunt for the Wilderpeople. He also stars in the Jumanji franchise as Nigel.

Darby is never far from his stand-up roots. His stand-up has been described as a sensational blend of sound effects, characterizations and askew observations. His career has taken him from his homeland of New Zealand, to the U.K. and beyond. He has performed his unique brand of humour in places as far flung as Iceland to the Falkland Islands, and in festivals from the Edinburgh Fringe Festival to Montreal’s Just for Laughs.

Rhys has four stand-up specials’, Imagine That! (2008), It’s Rhys Darby Night! (2011) and This Way to Spaceship, (2012) and I’m a Fighter Jet (2017). This Way to Spaceship was based on his debut novel of the same name, “A loosely autobiographical end of world companion” in 2012. It was number 1 in the international charts for 7 weeks. His fifth special, Mystic Time Bird will be out later this year.

Darby’s second book, this time for kids, was released in Australia and New Zealand in October 2018.  It is called The Top Secret Notes of Buttons McGinty. Darby wrote it for his 8 year old son, a reluctant reader, and has been thrilled to hear from kids and parents that they love it!  The second Buttons book, The Top Secret Interdimensional Notes of Buttons McGinty came out in October 2019 and the third will hit the shelves later this year.

A prolific voice over artist, kids all over the world hear him in Voltron: Legendary defender, Spirit, TMNT, Boss Baby, Jake and the Neverland Pirates and many more.  He also has two animated movies about to come out, 100% Wolf  and Mosley.

In between his huge adventures Darby is based in Los Angeles with his family where they like to hike, eat tacos and explore the world.